Prioritizing stories or features is hard and it gets much harder when there are conflicting opinions. Especially when someone becomes personally attached to them. What we need is for everyone to put aside their personal preferences for the needs of the customer and business.

I’ve learned to manage this from a pretty unlikely source. I grew up inside the Washington Beltway so it was kind of required that I thought about going to law school so I took constitutional law in college as an experiment. It was very interesting and makes me feel like a better citizen but there was no way after that I was going to choose the law as a career.

Appellate judges (who, if you care, decide questions of law and not of fact) use tests to make reasoned decisions on politically and emotionally charged issues. A test usually requires 2-4 things and if you don’t have them, your case is denied.

Recently my team was working with a client who needed to get new features to market during a critical part of the sales cycle with limited dollars. The client had more on his “must” list then could be done. 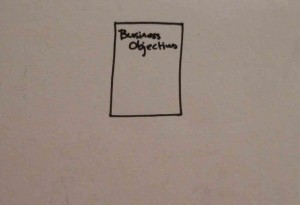 To the left of this we put each feature he wanted on on a Post-it® Notes. 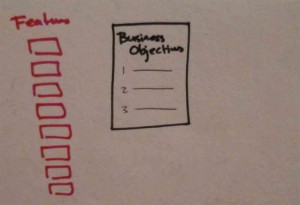 To the right we marked out the sprints until the critical release dates to impact the selling and on-boarding cycle. I did this to make it easy for me to pick up a feature, guide the clients evaluation of it against the business objectives and force prioritization. 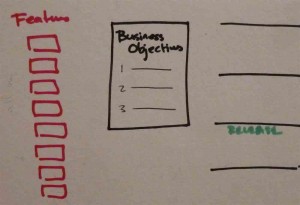 So we went one by one picking up a feature, matching it against the objectives and then placing it on the board or in the backlog. There was a bit of negotiation to start but about a third of the way in I picked up a post-it and my client said “I wanted this to be in before the release date but it doesn’t hit any of the objectives so put it in the backlog.”

We cheered, out loud. It was great to see his mindset change and to know we gave him a great tool to use.